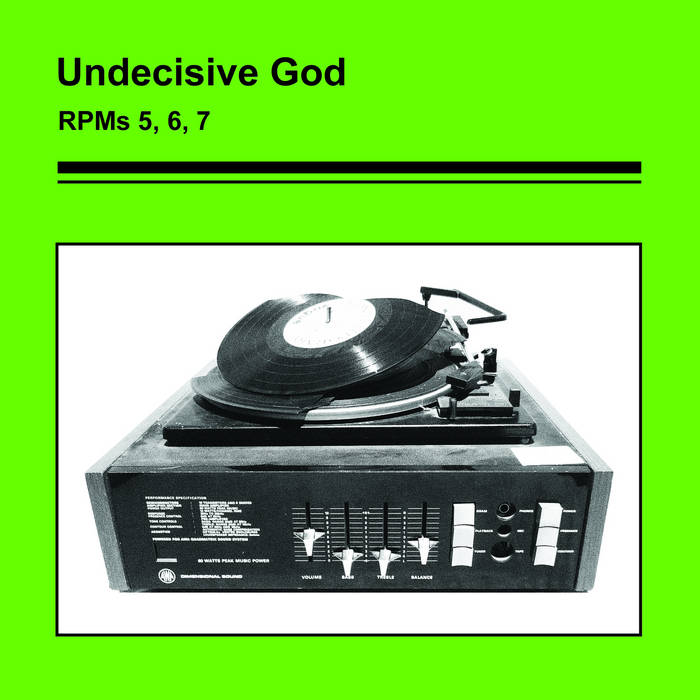 I can’t remember exactly what led me to using turntables as instruments, besides the vague recollection of a ‘what if’ moment: what would happen if you tried to play shards of broken records? This was soon followed by the idea of attempting to improvise on guitar along with the chaotic yet rhythmic snatches of music from each shard, and I soon realised I had hit a vein of richly-creative material that would become my main musical occupation for the next four years. I do know that I was growing frustrated with the sonic palette of electric guitar at the time, which had been my main sound source previously, feeling that perhaps I’d explored all the aspects of it that interested me. The idea of repeating old ground bored me, and I was hungry for new ideas and sounds. This was also at a time when I was beginning to become more interested in the theory and conceptual side of experimental music history, initially through my research of the Artefacts of Australian Experimental Music: 1930-1973 compilation CD (Shame File Music, 2007) and related projects, followed by a subsequent period of formal music/musicology study. Not only was I excited by the sonic output of what increasingly resembled ‘prepared turntables’, but by the questions they raised in regard to indeterminate composition and the role of the performer/composer.

My initial output framed the turntable as an automated yet indeterminate improvisation companion, or ‘improvising machine’. Some of these earliest recordings were released on the Duos for Guitars and Broken Records mini CD (Shame File, 2007), a limited edition of 52 with handmade covers I constructed out of cut-up LP sleeves and shards of vinyl. This release showed my interest in broken records as both a sound source and an aesthetic statement in themselves. The ‘improvising machines’ concept was expanded in May 2011 with a showcase gig at Melbourne’s Make It Up Club, where I put together three different ensembles with other improvisers (including Ernie Althoff, who’s long-standing adaptations of turntables remains an ongoing influence). “RPMs 7” is a live recording of a structured improvisation from this event.

The RPMs series of compositions and subsequent releases documents a more structured approach to different turntable preparations as well as interactions between multiple record players (see liner notes from RPMs 3-4 CD (Shame File Music, 2011) for more details on the RPMs compositional structure). With “RPMs 5”, I began to explore a different aspect of these turntables: as percussive machines. The influence of Althoff’s work is apparent here again, as I unplugged the speakers from my increasingly-decrepit turntables (bits were falling off from the punishment they’ve been put through; playing broken records ain’t great for stylus care) and instead pointed microphones at the action happening on the turntable mat. I’d discovered that the ‘acoustic’ sound of the stylus and tone arm hitting the broken records was complex and interesting in itself. Around the same time, I began adding other objects to the turntable mat that had their own acoustic and percussive properties (such as keys, coins, screws, chains of metal curtain rings and other small metal items). This particular line of enquiry has been my most recent focus, where I’ve literally piled objects and other detritus on top of turntables, interlocking chains of curtain rings with screwdrivers and chop sticks that add as extra ‘beaters’ to these indeterminate percussion machines that sometimes ‘lock-up’, adding surprisingly poignant ‘rests’ to the music, until the motor of the turntable breaks the gridlock and starts turning again. For “RPMs 6”, speakers are plugged back in to amplify the sound of three turntables playing the mats themselves (i.e. – the stylus rubbing on the turntable mats – the turntables are ‘empty’).

Throughout all of these different approaches to turntables, I’ve regularly felt a strong instinct to not interfere with the machines – to just ‘let them go’. This can be difficult for a performer, especially when performing solo, as one feels like they should be doing something! At one gig I was so pleased with the sounds the combined turntables made, I left the stage for a few minutes, and an installation of six self-playing turntables I did for the Melbourne International Jazz Festival in 2011 had little involvement from me at all once it was started up (visitors were free to play with the settings on the record players themselves, though). This fulfils a long-held conviction of mine that we do not possess music; either as consumers, audiences, performers or composers; instead, we are part of the phenomenon of music. And not only is less sometimes more, but on occasion doing ‘nothing’ actually has a big impact.

Written and performed by Clinton Green.